I won’t beat around the bush – the awesome Asus ROG Phone 2 has finally come to India. This may sound biased but if you care about the latest smartphone technology even minutely, you cannot dislike the ROG Phone 2. Similar to its predecessor, the ROG Phone 2 is a culmination of the most powerful smartphone technology you get to see in the Android universe. It’s a geek’s dream made real. And the best thing about this year’s model is that it is within reach of the common man’s pocket.

With a starting price of Rs 37,999, the ROG Phone 2 sits in a sweet spot where you tend to find a lot of the flagship killer phones and some gaming smartphones. Unlike any of its rivals, the ROG Phone 2 offers features that may become common by the middle of 2020. And this makes the ROG Phone 2 an easy choice, at least on paper, for someone who wants to stay ahead of the competition for the most part of the next year.

Therefore, it looks mighty on paper and for a hardcore gamer like me, I had to lay my hands upon this thing. The full review is coming up in a week or two but here’s what I found after spending a couple of hours with the ROG Phone 2. 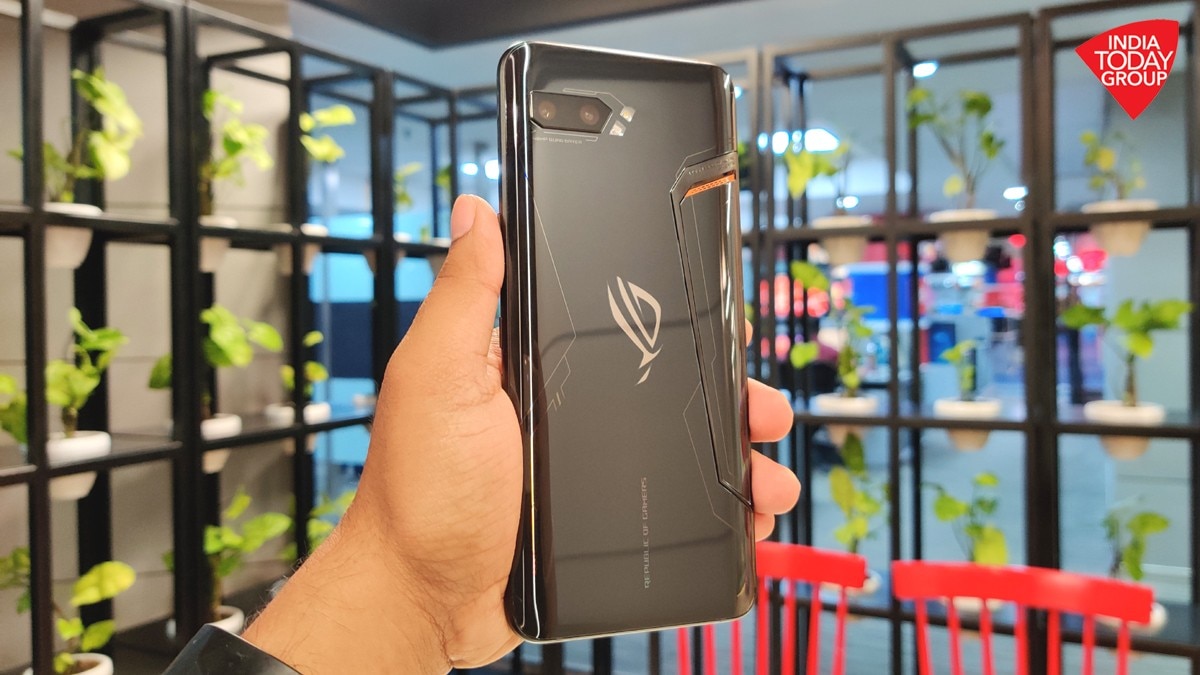 The ROG Phone 2 is a huge phablet that echoes the design of its predecessor. However, Asus has polished up the design to make it seem premium from every angle. You still get to see the angular lines and shapes at the back but the capacitive fingerprint sensor is now gone and so is the plastic module that housed the vents on the ROG Phone 1. And now, there’s only one vent that’s neatly embedded in the design. There are a few lines going around the body with reflective gradients but even with the orange coloured heat vent, the ROG Phone 2 looks premium. It feels like a flagship.

Gamers, don’t get disheartened though. Asus has embraced the premium design but it retains some of the signature ROG elements, which includes the RGB backlit ROG logo. On a clean rear panel, it now looks grand.

I wish I could have said the same thing about the front. But sadly, you still get the same 2018 design language with thick bezels on top and bottom. However, like Google, Asus has mounted two powerful speakers on either ends and in the short time I played around, I can say that you won’t need a headphone while playing games. But even if you do, there’s a 3.5mm headphone jack. Asus, we like your approach to the concept of a flagship smartphone. 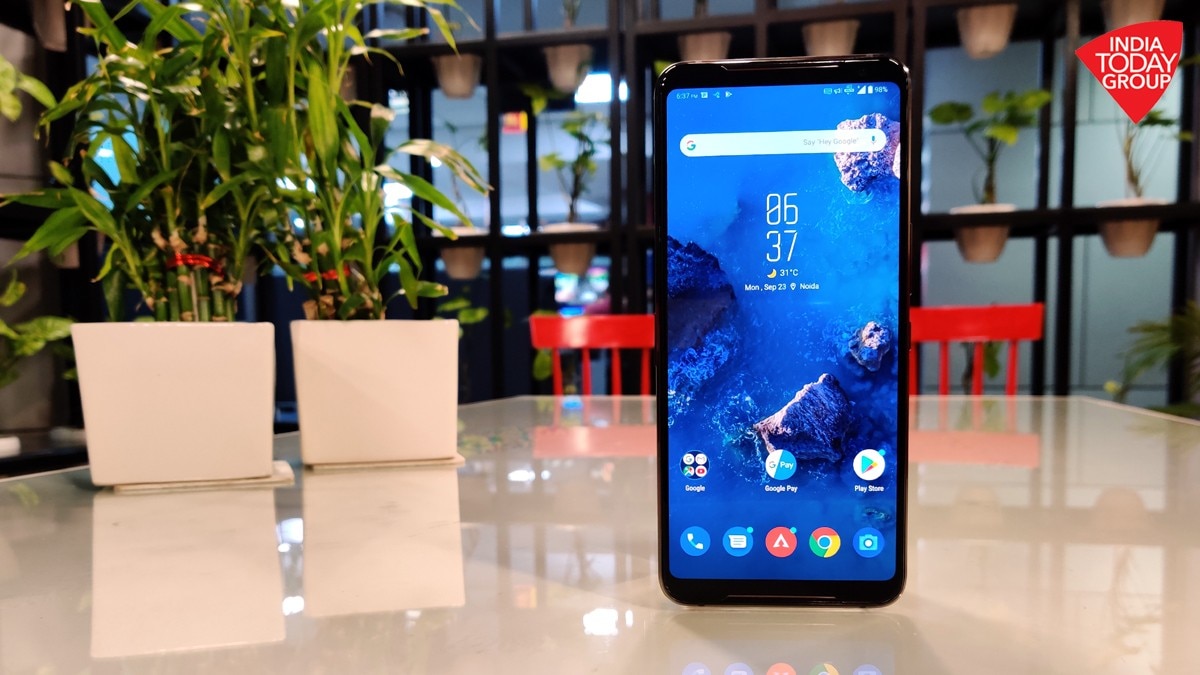 However, there’s no getting around the fact that the ROG Phone 2 is huge – huge in size and weight. It weighs 240g and despite the weight balancing, it is a hefty phone. And the 6.59-inch display with bezels makes the ROG Phone 2 a two-handed phone at any given time.

So feature-rich that it puts other flagships to shame

A few weeks ago, the Samsung Galaxy Note 10 Plus came out as the most feature-rich flagship phone you can buy today. The ROG Phone 2 grabs that title and takes it up a few notches up. Because when it comes to impressive technology, the ROG Phone 2 has it all.

This is a gaming phone and that means ultimate performance. Hence, Asus employs the Qualcomm Snapdragon 855 Plus chipset, making it the first phone in India to use this chip. The regular Snapdragon 855 is no slouch and the Plus variant can only offer better performance. I did try a few small duration PUBG matches and the ROG Phone 2 behaved as if I asked it to open the Facebook app. Now I am using the Indian variant with 8GB RAM and 128GB storage, hence with the higher-end model that has 12GB RAM, multitasking should be even better. Asus has worked on the small details such as the UFS 3.0 storage that should aid faster app load times. There’s a 3D vapour cooling chamber along with a heat vent that Asus claims will sustain peak performance. Is it true? We can only find out in our final review of the ROG Phone 2.

To ensure this flagship-class performance stays around for long, Asus is using a 6000mAh battery that should, in theory, offer a two-day battery life. Although this is something I will have to see in the coming days, I expect the phone to last a single day comfortably with all the bells and whistles engaged. Wonder why I said that?

That’s because the ROG Phone 2’s biggest draw (in my opinion) is the massive 6.59-inch Full HD+ AMOLED display that has a refresh rate of 120Hz. Yes, you read it right – 120Hz refresh rate. That’s laptop territory and it outdoes the 90Hz display of the OnePlus 7 Pro. The difference is visible as the 120Hz refresh rate makes every animation on the display seem so smooth. Watching videos or playing games, it’s always a smooth affair. Sorry OnePlus 7 Pro, you ain’t my squeeze anymore. Speaking of squeeze, the ROG Phone 2 gets Air Triggers 2, which is essentially a cool name for the touch-sensitive sides. When held horizontal, there are two ultrasonic touch patches that act as customizable buttons to emulate a joystick. The Nubia Red Magic 3 also has this stuff but Asus is using ultrasonic sensors and hence, it is more responsive. While playing PUBG Mobile, I was definitely able to feel the advantage.

The software has also been done tastefully. Out of the box, the ROG Phone 2 will let you choose either the crazy ROG UI with neon icons or the ZenUI 6 that we saw in the Asus 6z. Both the interfaces are fast and fluid, although it remains to be seen whether it remains that way over the course of time. The ROG Armoury Crate is back and I still think it’s quite cool to look at the phone’s performance data in cool neon-style pie charts.

Oh, and Asus hasn’t forgotten the cameras. The ROG Phone 2 uses the same dual-camera setup from the Asus 6z, i.e. the same combination of the 48-megapixel Sony IMX586 sensor with F1.7 lens and a 13-megapixel wide-angle camera. Sadly, it doesn’t flip, which is why there’s a 24-megapixel camera up front for selfies. In my brief time with it, the cameras seem to be good and should do well in most lighting conditions. There’s no easy wait to put it – the ROG Phone 2 is one of the most exciting Android phones we have seen this year. It’s cool, funky and mighty powerful. If you love spending hours on PUBG Mobile or any other mobile game, the ROG Phone 2 seems to have everything to wake up the inner 9-year-olds. What I am happy to see is that instead of going crazy with more RGB lights or wild graphics, Asus has worked and improved the areas where it really matters for gamers.

Is it the ultimate phone to buy for performance seekers? Hold on for that in our final review in the next few weeks.